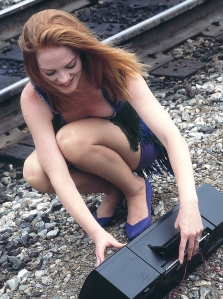 Alida Nugent, a writer, put together an article for the Huffington Post entitled, “10 Things We’ve Accidentally Learned From Crime Dramas.”

Personally, I can’t say that I’ve learned anything important or earth shattering from watching crime dramas, other than all TV crimes are solved in under an hour…..with the exception of who the hell “Red John” is on the Mentalist.

Anyhow, I took my usual inquisitive look at what she’s listed and added my own perspectives.

2. “Crayons.   Meaning that the most insignificant piece of evidence can be crucial.  In one episode detectives found crayons at the scene of a crime that only two stores sold in Manhattan where the owner of the store turned out to be an ex con and a murderer.” That….and the fact that all of his drawings with those crayons were outside of the lines.  I would have thought that to be of a suspicious nature too. Kindergarten and up we all know when you use crayons you have to stay within the lines. DUH!

3. “Security cameras.”  Of course!  Everywhere there are security cameras that can zoom in on any crime scene showing the most intimate details such as an ant nibbling on a crumb on a sidewalk which could in turn help the forensic people determine what type of snack the perp ate while committing the crime.

4. DNA.  Alida says that the 55 minutes you watch the show doesn’t matter because DNA always cracks the case. I’ve narrowed it down to 40 minutes due to the fact that commercials take up the other 20 minutes. This all means that you can utilize that useless time before they get to the DNA part and make yourself some really good snacks before they get to the DNA part….which is the last ten minutes of the show.

5.  I didn’t quite get this one.  She referred to a book, which I assume is some sort of book that law enforcement people are supposed to go by….in which case, they usually don’t and throw it out….I guess.

6. “Every city is the most dangerous.”  Yep, that’s true. If you watch any crime drama your town or city will eventually show up.  With the exception of my town because there’s nothing to attract crime here and its so small that if you plug in your electric razor all the lights in town dim. I think most crime suspects live here and go everywhere else to commit crimes.

7. “If you are a woman detective you have a uniform, ribbed turtleneck, boxy leather jacket, grey business pants, square-toed shoes, hair in a ponytail or short cut, and wear hooped earrings.”  WHAT!  obviously Alida is incorrect in this assessment.  Any crime show I’VE watched has the women detectives wearing low-cut boobish tops and tight jeans. Obviously to distract the perps while arresting or questioning them. Example, Marg Helgenbeger, CSI and Paget Brewster, Criminal Minds.  Sela Ward, CSI, running a tight close third in the running.

8. “Good cop, bad cop.”  Oh yeah….we’ve all seen this.  Except for the time I got yelled at for parking my car in a fire zone area outside a McDonalds and a state trooper yelled at me. I asked him where the good state trooper was and he yelled at me even more. I guess you only get a choice if you’re involved in a major crime.

9. “If you think you know whodunnit in the first five minutes….you’re wrong.”  This goes back to the first piece of advice Alida gave us.  The ex stepmother and others.  My track record is pretty good on this point however. I can usually pick out the SOB in the first five minutes.  Here’s a few tips on how to do that.  If there’s a guest star, like somebody famous, or a goofy innocent looking wouldn’t hurt a fly type person, or a repairman who just happens to have visited the crime scene, one of them did it. The only exception to this rule is if it was an Avon lady, someone handing out religious booklets or a politician.  Um, scratch that last one….you know how politicians can go either way.

So there ya have it.  Now all of you check your local TV listings and put all of this to the test watching some crime drama tonight.

ME……I’m gonna slap in a DVD where there are No commercials……one that I’ve seen before and know the ending……..but wanna watch it for the scene where the suspect, Sharon Stone, sits in the interrogation room and is questioned by the cops while exposing a crucial body part which totally disrupts their line of questioning and she gets off.  Or they do……….I’m not sure.

Works for me….I know the ending, I get my uncensored excitement, there’s no commercials, and I have the ol pause button for those tasty TV snacks.