Lead Pipe Joe, Jimmy The Weasel and Dickie The Nose

Terry, Dickie The Nose's sister....who got the better of the nose deals.

Pinocchio appearing before Congress but not telling the truth.

When I was just a young boy, many many eons ago, I could have ventured off in a few directions career wise.

The reason for this was the fact that my ol man,  John who’s real given name was Giovanni, was actually a member of the Mafia.  Not a real big important member mind you, but important enough that he may have had a nickname like most Mafia people have.

I never found out what that was, because I never saw much of him. Mafia guys tend to travel around a lot. So, I wasn’t raised by him because he was too busy off doing whatever Mafia guys do.

My point here is that had he been an influence in my early life, I might have wound up being part of the Mafia as well.  Instead, I ended up as a disc jockey using a fake name because my real name was too Italian and way too long.

But I can only imagine what I would have been given as a nickname had I been in the Mafia.

For instance, here are some names of famous mobsters.

Joseph E. Todaro was known as Lead Pipe Joe. One can ony imagine why. I’m almost positive it wasn’t due to any plumbing skills.

Tony Accardo’s nickname was Big Tuna.  Again, I’m assuming because he may have been rather chunky. Either that, or he ate a lot of tuna fish.

William Daddano, Sr. was Willie Potatoes. Alfonse Capone of course was Scarface.  Louis Fratto was Cockeyed Louie.  Aladena Fratianno was Jimmy The Weasel.  Anthony Caponigro’s was Tony Bananas and Thomas Lucchese was Three Finger Brown. How you get Three Fingers Brown out of Thomas Lucchese beats the heck outta me.

See, they all had very colorful nicknames.  Which is one reason I kinda considered asking my dad if I could join.  I wanted to have one of those cool nicknames.

Then I thought about what they’d possibly call me, and I had second thoughts.

This was due to the fact that my Italian nose is a bit bigger than your average nose.  I could picture myself being called, Dickie The Nose.  It’s not like you’d fear anyone called Dickie The Nose in deference to Lead Pipe Joe or Scarface.  Now those nicknames strike fear in people.  But Dickie The Nose?

Yeah, I know a lot of famous people have bigger noses than me and it never stopped them from progressing in their careers.

There was Pinocchio, Jimmy Durante, Danny Thomas, Cyrano de Bergerac, and my next door neighbor Mrs. Grosndinck, although she was never famous. She just had a big nose.  Which may explain why the neighbors called her a nosy person.

Then there’s my sister.  Her nose resembles mine but in a cruel twist of fate, God decided to make her nose fit more perfectly on her face than on mine.  So as it turned out, her nose actually makes her look very attractive, while my nose, when I have a bad cold, could guide Santa’s sleigh on a foggy night.

I do have an application on file at the North Pole should Rudolph ever retire.

Since my sister got the better of the deal, she’s always been photogenic and freely posts her pics on the web.

I, on the other hand, very rarely post ANY pictures of myself unless they have been edited,  am in some sort of disguise, or wish to scare off any of my ex wives should they have any intention of contacting me.

My apologizes to my sister Terry for bringing her nose into today’s blog.  It could have been worse sis……I could have mentioned your “snork” sound when you laugh.

HEY……if I got stuck with the bigger nose you HAD to get something else to offset it to make it an even deal! 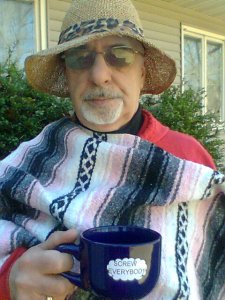 Dickie The Nose in disguise on the Island of Sicily

1 Response to Lead Pipe Joe, Jimmy The Weasel and Dickie The Nose